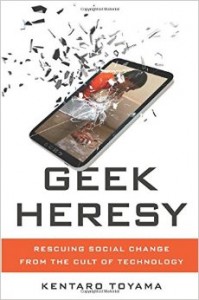 Why is it that a job posted on LinkedIn is for anyone to apply, but the person who is most likely to get an interview call is someone who either knows the HR or knows someone inside the company who is on his LinkedIn network? Why is it that even though internet is widely available in China, it cannot break the censorship walls built by the Chinese government? Even when technology is available to everyone, why is it that highly motivated individuals use it very differently and for very different purpose then those who are less educated and have very less aspirations in life?

While technology can give equal access to everyone, it cannot replace social access that only few privileged people have, which  guarantees their entry for a job interview after controlling for skills and education. Similarly, without the right political and social institutions, freely available internet access to everyone still does not guarantee access to unbridled information. Or even when technology is available for anyone, the more educated, ambitious, and highly motivated individual will be very discerning in the use of internet for educational purpose as opposed to someone who would use it more for entertainment.  Sounds like common sense, isn’t it? As much as it sounds so obvious, Kentaro’s book is an eye-opener for anyone who believes that technology can be an end in itself in solving certain social problems. Kentaro Toyoma  makes a compelling case that technology cannot have any impact without  nurturing the right political and social institutions; it cannot transform an individual who lacks the right motivation, judgment to make the right choices, and self-discipline and control to follow through the right choices . Though written by a computer scientist, this book is more written from the perspective of ethics and philosophy.

I met Kentaro when I had just started my career as a journalist. Kentaro was heading then Microsoft India Research Foundation where he was involved in interesting initiatives that harnessed technology for social change. The book is based on Kentaro’s experiences in India as a part of Microsoft Research Foundation. It was during this journey that he encountered several non-profits and organizations that were intending to drive social change through the use of technology such as one laptop per child and similar initiatives, but these intentions were not matched with the right outcome.

While the book has numerous examples and case studies of organizations that were successful in harnessing technology along with building human capacity to use it, it falls short to a certain degree on rigorous scientific evidence. Several examples are from education and micro lending space and based on anecdotal evidence based on his personal experiences with these organizations. The book could have been enriched by including more evidence from public health where it is commonly used to target patient adherence to treatment, follow-up plans, using text-based services that are designed to change key behaviors towards reducing the risk of certain diseases.  Despite its shortcoming on rigorous scientific evidence from other fields like public health, the book is well-written, engaging, and drives home some of the fundamental principles that can predict success of a technology based program in transforming social change.

One thought on “Book Review: Geek Heresy: Rescuing Social Change from the Cult of Technology”